Way back before “The Fast and the Furious” made it onto the silver screen. Before Hot Import Nights first came to town. Before hot rodding a Honda or Acura was the dream of every high school gearhead in the San Gabriel Valley. Before import tuners were known as import tuners, and even before Nissan was known as Nissan here in the States, there was the Datsun 510.

While live rear axles and overhead valve motors were the norm, Datsun turned the economy car world upside down when the PL510 sedan was introduced with an aluminum head overhead cam engine with five main bearings, a four-speed all-synchronized transmission, front-wheel disc brakes, four-wheel independent suspension, and rear-wheel drive. These were features only found on sport sedans like the BMW 2002. Datsun’s 510 carried a manufacturer’s suggested retail price of $1,996. Even at 1968 prices, it was unheard of.

Doug Endo’s Datsun 510 in a slightly higher stage of tune in the early 1970s.

All that came afterwards owes some homage to the 510 and to the band of hot rodders in Gardena, California, that took their budget Bimmers, and turned them into SCCA racers for the street.

The inspiration came from Pete Brock, best known as the designer of the Shelby Daytona Coupe that won the GT class at the 24 Hours of Le Mans in 1964. In the early 1970s, Brock Racing Enterprises (BRE) lead performance-tuned Datsun 510s in the 2.5 Series Trans-Am Series, and won.

That Pete Brock and BRE played a huge role in spawning what would later be termed the import tuner market is undisputed. Less clear, however, is whether any single consumer can be credited with creating the first street tuner out of the Datsun 510.

Doug Endo with his daily driver, a black on black Corvette Z06 (Nakano).

Doug Endo thinks he may have been the first in the Gardena area to lower a Datsun 510 and turn it into an SCCA version of a street rod. Two factors support this claim:

First of all, Doug worked in the parts department of Gardena Datsun (now known as Gardena Nissan), and had access to the SCCA racer parts as soon as Datsun dealers made them available for the 510. Doug recalls being the first one to purchase the parts, and had the Gardena Datsun service mechanics install them as they became available.

Second, Doug’s contention is supported by the recollections of some members of the Gardena High School alumni, including this author. What Doug was doing to his car was diametrically opposed to what most youth were interested in at the time—and that happened to be American muscle cars of the 1960s and early 70s. And while many muscle car owners liked to raise their cars—particularly in the rear to emulate a drag racer, Doug took his import tuner and slammed it to the ground.

“Polyurethane bushings, BRE springs, schocks, sway bars, front spoiler, wide-rim American Mags Libre wheels, Brigestone racing tires, large diameter exhaust pipe, Turbo muffler, Wink mirror, custom steering wheel, fog lamps…,” Doug rattles off a number of the changes he made to his 510. Soon thereafter, it seemed like every youngster with a 510 in the South Bay neighborhood was lowering his or her car and giving it the SCCA treatment.

Of course, if Doug hadn’t been the first, others would have blazed the same trail anyway. Datsun 510s were so plentiful back then, and the temptation of BRE racing parts was too great to hold back. But Doug’s 510 served as a rolling advertisement, spreading the word for the new American hot rod to come.

Doug Endo wants to make clear that he doesn’t always have a tall cool one in his hand. Above: Doug at Kings Hawaiian Bakery – The Local Place (Nakano) 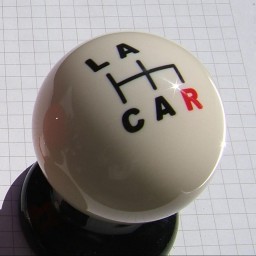