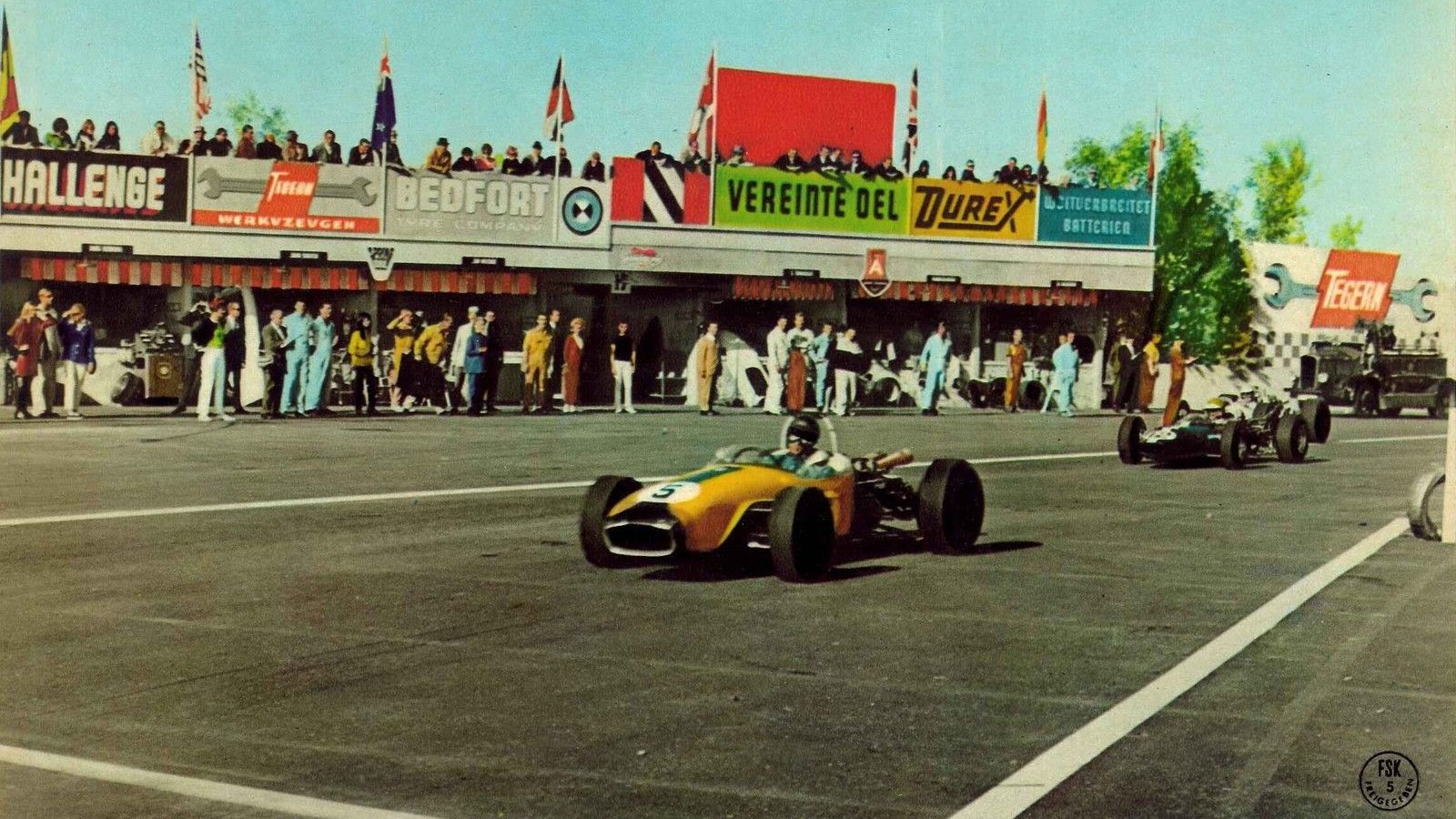 Have You Ever Heard Of This Movie?

Doug takes us on a trip down memory lane... Movie Lane, that is.

For example: you know that Bella Darvi was the femme fatal in “The Racers” and that Jim Garner really did quite a bit of the driving (including setting himself afire at Spa) in “Grand Prix”.

It’s a good bet that you quite likely know Bruce “The Sound of Speed”* Kessler was the second unit director on Howard Hawks’ “Redline 7000”, that McQueen did “all” his own driving in “Le Mans”, that Mickey Rooney wouldn’t even sit in the real car while it was running while shooting “The Crowd Roars”, and, that (even if you don’t give a damn), Bud Rose was in the car for Gable in “To Please a Lady” as well.

*look that short film up, you’ll see some of the earliest (and best) on-car camera work (ever) and a title sequence that was lifted whole cloth for the opening sequence in the movie “Grand Prix” that was shot five years later.

… Perhaps (if you really are deep into it) you also know that Joe Alves (the guy who was the production designer on “Jaws” and designed and built “Bruce” the mechanical shark for that blockbuster film) was also the dude who introduced PLN into racing and who worked as an Art Director on Newman’s much closer (on the podium at least) to real racing film “Winning” a few years later.

And of course you surely know by now, that Ken Miles was not so much of a son-of-a-bitch as he was portrayed in “that” movie, but a very highly-focused, talented, and respected racing driver. You likely know that word around the race shop is that Tom Cruise did most of his own wheelwork in “Days of Thunder” and that, to the contrary, his antagonists in the film, Cary Elwes and Michael Rooker sat out a whole lot (some claim all) of the on-track action.

So it goes without saying that we all know that there’s a hundred more questionable “racing movies” out there, but let’s just cut to the race and ask this:

What made-for-tv-movie (that was later released theatrically nationally and internationally to almost no acclaim) starred Darren McGavin as an old(er) gristled F1 driver and Sal Mineo as cocky pit crew guy?

That’s what it was called when it was being made in 1969 anyway. I was there, on-site, saw that name printed on the scripts and scrawled on the clapboards. I think that it ran on TV one time with that moniker but when it was subsequently released to play as a feature in movie houses it was renamed: “The Challengers” (something about another movie having a very similar title … in French). I missed the showing for some reason.

Shot in 1970 the production made use of a real whole lot of stock newsreel racing footage, which did not blend all that well with the action scenes that took place at Paramount Ranch in the Malibu Hills, the site of a long-abandoned sports car road course/movie Western Town set. Nor with the “Cahuenga side of the hill” parking lot of the Universal Studio Tours where the lead shot of 18 was taken … this film was destined to end up with more aliases than Tony Curtis in “The Great Impostor”.

The film was made four years after the debut of John Frankenheimer’s epic “Grand Prix” and “starred” a trunk-load of TV favorites of the day including Nicos Minardos and Sean Garrison as teeth-gritting, scowling, bellowing, wide-eyed, blood-in-the-teeth, broadly-reacting (no Bell Star full-face helmets on drivers to obscure faces and emotions in those halcyon days) racing drivers. It featured Farley Granger as some good-looking (but sort of nervous) guy, Richard Conte as a suave/sinister person seeking to be of some note, and teen heartthrob Sal Mineo. The ladies: Juliet Mills, Susan Clark, Anne Baxter, each seemingly played a version of semi-wicked (and willful) woman who was, I guess, somehow (maybe) faintly involved with the story line for this one.

Acting-wise the rather large and obligingly serious cast of old studio favorites could easily have been slogging their way through an episode of “Columbo” instead of this saga. Mineo played a “racing mechanic” in an ill-fitting jump suit, I suspect that it must have been some sort of an inside joke he was having (but maybe not) as he’s seen holding tools backwards in a couple of his (few) scenes. Pete Rugolo, the popular jazz musician/composer provided the (almost too hip for the room) score that sounded a bit like something of a low rent version of Elmer Bernstein’s music for the 1955 classic: “Man With a Golden Arm”.

On the tech and technique side of the lens, there was a pretty good amount of focus-pulling, colored gels, and woo-woo camera blurs - some of which appear to have been caused by the loader bumping the camera when it was still running, and the producer seeing it in the cutting room and saying, “That’s GREAT leave it in!”. No one was going anywhere near over budget for this one.

To the best of my knowledge it was shown once on TV as “The Big Prize” but that name changed thereafter and forever to “The Challengers” at least in the domestic market. Abroad, this cinematic gem was known variously as “Seida Sulla Pista Del Fudco”, “Smrtonosna Pista”, “Sensation Paracebanan”, “Vidas En Peligro”, “Herausforderung Zum Grand Prix” and some really even more unpronounceable titles.

As it turned out, the aforementioned Joe Alves was a racing buddy of ours and, just by chance, the Tech Advisor on this masterpiece. As part of that job, he was tasked with hiring out a bunch of small-bore formula cars from local racers to stand in for F1 cars. My (old even then) Lotus 18 was one of them. That’s it, number 5, fake exhaust, with taped-over bodywork “racing” past the pit set in the studio parking lot in the accompanying movie poster.

As a side note, Alves himself did a good deal of the driving for this one, along with 1950 Indy 500 winner Johnnie Parsons and race car designer, Bruce Eglington.

It was great fun, including me being pressed into service by the producer as an on-the-spot technical advisor to coach Mister McGavin as how to slip down into a formula car by holding the roll bar more like the gristled old vet - he kept trying to sit down first and would get his knees wedged against the steering wheel.

Of some note, this motor-movie-masterpiece was the first ever CBS “made-for-TV” movie. Originally scheduled for airing by CBS on 28 March 1969, it was preempted because of the death of former US President Dwight D. Eisenhower.

About all that’s left of this one is the “… let’s just make it for what’s left in the budget”-trailer that anyone can catch on YouTube.

Me? … I sold that Lotus for far too little money many years ago and I’m still trying to get a hold of a copy of this epic movie, anybody got one?

Doug has a long and wide-ranging history in the motoring business. He served five years as the Executive Director of the International Kart Federation, and was the PR guy for the Mickey Thompson's Off-Road Championship Gran Prix. He worked racing PR for both Honda and Suzuki and was a senior PR person on the first Los Angeles (Vintage) Grand Prix. He was also the first PR Manager for Perris Auto Speedway, and spent over 20 years as the VP of Communications at Irwindale Speedway. Stokes is the recipient of the American Autowriters and Broadcaster’s 2005 Chapman Award for Excellence in Public Relations and was honored in 2015 by the Motor Press Guild with their Dean Batchelor Lifetime Achievement Award. “… I’ve also been reviewing automobiles and books for over 20 years, and really enjoy my LA Car assignments.” he added.

NASCAR at the LA Coliseum